No, that's not a mispelling...my roomate who is in Dallas just text messaged me and I thought it was cute. It sure doesn't feel like Easter. The temp outside is in the low 60's and quite windy but the sun did peak out for a brief minute. Baby, it's cold outside...ok, not as cold as in Santa Fe, or Austria or Netherlands but for Houston it's brisk indeed. His Royal Highness-Chulo sure hasn't moved and probably won't awaken for at least another hour. Just as well, as I just made a glorious cup of coffee and yesterday I splurged and bought an apple fritter (doughnut) and am enjoying the leftovers. The three day weekend sure did speed by and as always, I didn't do half of what I planned to do. So it'll have to wait for another 3 day weekend, which won't be till April 22nd when I put in for a personal day.

Some other big news that happened over the past week...my trip to Spain is off but another surprise is that now it looks like I will be travelling to India! Never in a million years did I ever think I would travel to India. However, a friend from college is getting married and has extended an open invitation to come to his wedding and all we have to worry about paying for is the airfare. Still, the trip seemed like a distant possibility but certain events and coincidences have just falling into place this past week and if all goes as planned we will purchase our tickets in the coming week. I'm excited and yet at the same time anxious as India is half way around the world and such a distant continent but it looks like the miles will not matter very soon. Time will tell what the future will bring.
Posted by Luz at 3/27/2005 08:03:00 AM 1 comment:

Huntsville State Park
Originally uploaded by nieve44.
The loblolly flowers were just starting to bloom in East Texas. Sort of reminds me of a light snow on trees.
Posted by Luz at 3/22/2005 10:23:00 PM No comments:

A River Runs Through It

A River Runs Through It
Originally uploaded by nieve44.
I went camping this past weekend and finally found my camera to post some pics on flickr. Wish I could say that we had the perfect weekend while camping but quite the contrary. Friday, started with my friend's niece locking the keys in the car and she had to call a locksmith to come and unlock her car. Then, we bought some bad wood and had the hardest time getting a fire started the first night. Finally, on Saturday morning we got some good fresh wood to burn later in the evening but then the rains came by way of a very powerful thunder- storm. Rain got into the tents and we ended up having to drive into town and spend the night in a hotel. Only to come back the next morn and begin packing up to head home. Surely, not the best camping trip but nonetheless quite adventurous. Still, I was able to come away with a few pics from Saturday's hike in the woods.
Posted by Luz at 3/22/2005 10:15:00 PM 1 comment:

Sad but true and funny in a sick kind of way.

I love gossip...especially about famous people and have come across this wonderful blog that just cracks me up. I just wish I could figure out who the blogger is, which is supposed to be some famous person as well.
Posted by Luz at 3/16/2005 07:34:00 PM No comments: 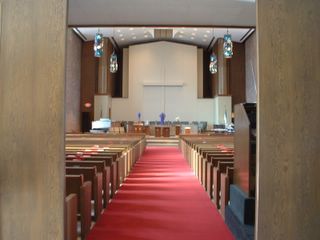 On an early Saturday evening of March 12, 2005 at St. Phillips Methodist Church in Houston, begins a new journey of matrimony between two very special people who re-define love, committment and courage. Jhon and Kim in the midst of hardship and physcial challenge found eachother a few years back. Today, before the eyes of God and honored guests they exchanged wedding vows and promised not to just love, honor and obey but to help eachother overcome their physical limitations and find strength and courage in one another. To see and witness their courage and love is an inspiration to me and everyone they meet--as both Jhon and Kim are visually impaired. Jhon is completely blind and Kim has limited vision but yet, they do not seek pity only dignity and do it with such grace and humility and most of laughter. They redefine the old joke, "the blind leading the blind". Yes, the blind is leading the blind here and if you should cross their path, stand back, watch and be amazed and wonder--not in their disability but in their a-b-i-l-i-t-y. Today, was such a joy to witness and the following pics are only a small glimpse of this joyous occasion. Congratulations Jhon & Kim.
Posted by Luz at 3/12/2005 09:45:00 PM 4 comments: 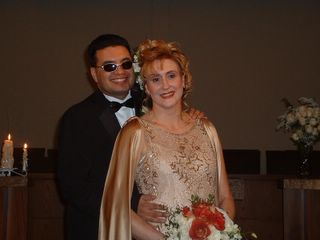 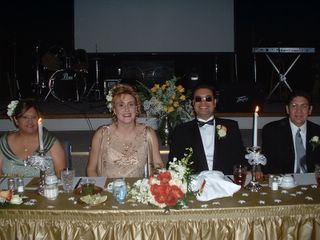 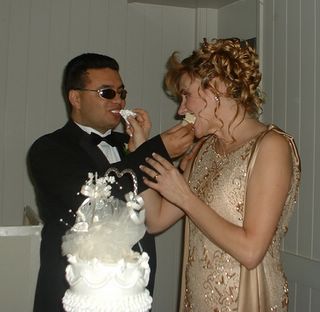 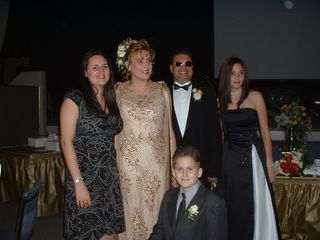 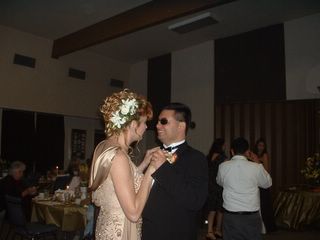 ...came across this on a car with license plates from New Mexico--no doubt!

"It takes a village to elect an idiot"!

LipService
Originally uploaded by nieve44.
I was at a birthday party for friends from college who have two girls. I took several photos of the girls and in almost every photo the oldest was making faces. I found this to be the funniest one and it cracks me up everytime I look at it. Apparently, she doesn't like her photo being taken and so she proceeds to make the ugliest face. Might have to try this myself next time!
Posted by Luz at 3/07/2005 12:44:00 PM 1 comment:


Look what Santa Claus brought me in the Spring time. :-) Thanks Boris. Your one in a million! I love the postcard and I love this painting by Frida!! Wish you could see my smile!